What this is all about

By Scott B. Anderson

A story in the Old Colony about the shoddy state of the memorial and Paul Barber’s longtime personal yearning to have the three Coast Guardsmen who died oficially named as heroes was the catalyst for trying to organize a formal drive to improve the memorial and get the heroes declared as official heroes.

“In my mind they did their jobs heroically, and I would like to see them called heroes,” Manoment native Barber told the OCM. “They deserve the dignity.”

“I would like to see them just clean the area up, loam it, plant some new grass and make the memorial a little nicer. It’s going to be there forever. It’s part of our town, part of our history, and I think it needs to be preserved.”

For me, it’s very personal. My grandfather, Russell W. Anderson, was among the heroes that day. He set off in a small rowboat from shore with state trooper John Horgan to try and rescue Cashman, Stark, Griswold and the five others whose boat had capsized enroute back from the scuttled Robert E. Lee.

For Paul, the floor beneath his feet while growing up was a literal reminder of the tragedy of 1928. That floor of his family’s cottage was built with lumber from the Point’s Coast Guard lifesaving station at which those who drowned were based. It was torn down in the mid-1950s.

The Point holds many other memories for me.

Our father, for some reason, got his jollies when we were very young by pretending he was driving over the edge of the bluff. Not once. But again and again over the years. He was amused; our mother in the front seat and my siblings and I, hysterical in the back seat, not so much. He also carted us up there in hurricanes, tropical storms and northeasters. 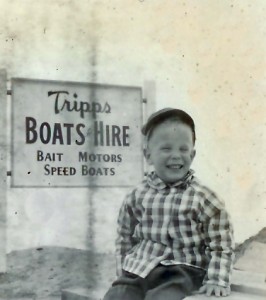 One of my favorite pictures is of me from the late ’50s, sitting near the Tripp’s Boat Livery sign just a few feet from the memorial. I use the mugshot for the profile picture on my Facebook page and other web sites.

Our aunt Eleanor Bartlett Slade (Russell’s sister-in-law) owned the house just a few yards south of the memorial. The closed-in porch that literally almost hung over the bluff had spectacular views — including those of the fateful Mary Ann Rocks.

The Point also brings very sad memories of another tragedy. A 22-year-old family member, boating about a mile offshore in the summer of 1985, went missing and is presumed to have drowned.

Our family has been in Manomet for hundreds of years and many relatives still live near the Point and the farms and homesteads that have been home to Andersons, Holmeses and Bartletts for centuries. The hearts of those of us who now live far away are still there and will be always.

Our hearts, too, are with the brave and selfless men of March, 1928. They deserve to be officially recognized as heroes, nearly a century on. And they deserve a memorial marker with nicely manicured grass, a granite and wrought iron fence, a few flowers and a flagpole, maybe.